Name it and claim it!

When redesigning the Back to Karkand maps for Battlefield 3, the design philosophy has been to recreate the maps from Battlefield 2 a few years later in time than the original battles. As a player you will recognize most parts of the maps, but all things will not have stayed the same. For example, one of the control points in Gulf of Oman (Rock Fort) used to be a seaside military base. In Battlefield 3, this control point now sees villas in the same location. This means we need a new name for this control point!

What do you think the control point should be called? Please take your inspiration from the screenshot and control point description below and send us your suggestion! Doing this means you have a chance to get your control point name included in the expansion pack – and your own name in the credits!

This beach was once the scene of intense fighting, as the US marine corps staged an amphibious assault in order to capture the strategically located airfield. Since then, this beautiful locale has started transforming into a desert gem for wealthy tourists, as luxury housing and parks are being constructed. However, war is once again casting its shadow over this landscape and very soon, a violent confrontation between the world’s military super powers is bound to take place.
Click to expand...

-bZ- Member
Even if you don't submit your name for the chance to win, maybe we can submit our own names right here in our forums!

Maybe we can enter the best name from our list into the contest as "Banzore"!!!

-bZ- Member
For your reference, here is the BF2 map and where Rock Fort is. 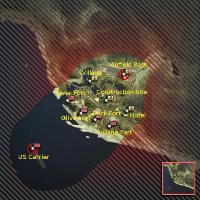 -bZ- Member
Donator
I used to hang out there