These rules apply to all of our BF4 servers as of April 2020. There are significant changes from our rules in the past in that there are far fewer rules, and for the most part it's everything goes outside of what's listed here.

Our admins operate on a point system. When you are found violating a rule, you'll be given a punish point by an admin. The first point will be a warning. After that you'll have varying levels of punishment from a kill, kick, and eventual ban if you're a constant problem.

All admin actions are logged, and many are also recorded by the punishing admin. Do not expect to get a different answer about a situation from a different admin. If you have a problem with an action taken by an admin you're welcome to post here in our forums as all admins can review each other's actions. We are not perfect and mistakes do happen.

Hacking/cheating will result in an instant permanent ban regardless of previous infractions or the lack thereof. We have a zero-tolerance policy against hacking and all accounts linked to an account determined to have been hacking. We use multiple methods to confirm hacking and do not ban based on suspicion alone.

1: GRIEFING / TEAMKILLING IS NOT TOLERATED!
No team killing, period, end of story.
Griefing: Purposefully shooting or otherwise sabotaging your teammates in an online game.
Griefing includes stealing of friendly vehicles while they are repairing (for example).
Forcing a TK is griefing.

2: ATTACKING UNCAP IS NOT ALLOWED (Conquest Only)
Don't attack the enemy's uncappable base (main base). If they fire out you can return fire.

3: No Racism
Don't be a racist and don't try to bypass the automatic filters.

4: No Politics In Game Chat
We're here to have fun and escape the real world so take your political talk elsewhere.

In general, don't be a trouble maker in the server. The above rules what will usually be cited in punishes/kicks/bans but other reasons may be used if you're an exceptionally problematic player disrupting gameplay.

Donator
Hi guys not sure if I can ask this question here but is poison bow banned I see ppl use it from time to time
I thought it was banned but some players say otherwise.. Cheers
M

The posted rules are the only official rules. People don't like teammates with the poison bow due to the easy team griefing possibilities, but it is not a banned weapon to my knowledge. As for general questions, feel free to start a forum thread for it, or even just ask in our discord.

Donator
all weapons are open to use

Donator
Are players allowed up here ? they were there most of the game 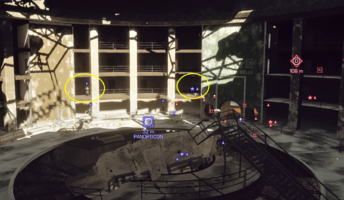 RazorBites said:
Are players allowed up here ? they were there most of the game

The easiest way to prevent people from hopping up there is by exploding the 2 concrete walls that are located just underneath and to the left of that circled fella off to the left hand side. The jump is fairly easy to do, and personally I do not consider it to be a glitch, but understand why some would. Not much to hide behind either as its super easy to lob a frag grenade or 320 up there and blast whatever/whoever is up there.

RazorBites said:
Are players allowed up here ? they were there most of the game

We'll call it a gray area, but yes it's technically allowed. It's easy to kill people that get up there, and block them from getting back. Airburst and M320 are your friend.

This behavior appears to be normal in prison.

what about laying mines right outside of enemy uncap?

i keep getting banned when i enter games? is there a way to see why. i just play casually and these servers are on my favorite list
C

Donator
What does battlelog say?
A

when will mortars be banned?
they ruin the game

Bason said:
when will mortars be banned?
they ruin the game
Click to expand...

no equipment, guns, classes, or playstyles will be banned or restricted.
it ruins the game.
Y

As far as I know, why don’t you ask Rogaine
Pizza or Panda

They're allowed on all bZ servers, yes.
M

Is kstyle allowed on GunZ?
Y

Mobius.jpeg said:
They're allowed on all bZ servers, yes.
Click to expand...

Thank you for answer. have a good day